Hope For The Future!

﻿Last Friday we took the three interns and our sons for a canoe ride down the upper St Croix, (the river was at  a ten year high! ) Marine (our 18 year old intern from Paris) and our son, Andy,  had the unique adventure of riding approximately  two miles down a VERY  fast river while holding  onto the bottom of a capsized canoe before we could manuever them to shore...thank  heavens for life jackets! Yup, it was definitely a memorable experience for our all of us. The next morning ( Saturday), Marine  spent the day helping me sell cheese at the St Paul Market.  As my customers greeted Marine, they eventutally asked her how her summer vacation was going at LoveTree, to which all morning that little pixie  tirelessly  answered  (with her soft breathy French accent)    "I  have had a great time on the farm!" She then would lower  her voice to a whisper while  dramatically widening  her beautiful hazel eyes and add  " although yesterday.........I almost died."
Gads!  She loved every painful wince that she could muster out of me infront of  my customers.
What a character!


Over the past six weeks we have had the immense pleasure of hosting three amazing young interns, and now, one by one, they are leaving us...it just isnt fair. We are always excited when new interns arrive, meeting new folks is always exciting, but these three were an adventure  by themselves. We never expected to fall so much in love with ALL of them...and now they leave!


Marine flew out for Pairis on Saturday after the market.

Lauren flew back to Syracuse this morning.


Kevin is scheduled to leave for New York  next  Wednesday, (doesnt appear that he has plans for returning to China anytime soon).


Our hearts are so very heavy, we already miss them.  To help soften the "blow', Aurore (from Belgium) recently arrived, her perky and upbeat personality is truly a gift, even though she too will be leaving at the end of August.   Since she was also on  "That Gawdawful River" trip...we were afraid she was ready to leave by that  Friday afternoon, thankfully, she is a curious sort and thought it was worth  giving us another chance, as long as we keep her away from the river. 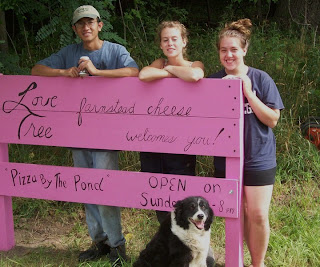 These three young adults milked and fed the cows, goats and sheep, tended to the guardian dogs, helped with fencing and worked  in the kitchen with the pizza, rode the tractor and yes, they also helped with the weekend markets.   These three were given a list of chores that needed to be accomplished, but just "how" the chores were to be accomplished was up to them. Before July, none  of them had ever met  the other, yet they worked out their differences, achieved compromises and developed an amazing  team atmosphere all on their own.
A young Chines man of traditional values who is interested in farming, an urban Parisian young woman who loves to dance and needed English immersion skills before business school in the fall, and a fiercly independent and soulful young woman from Syracuse whose main focus is conservation of our nation's forests. To these three young adults we will be eternallly  grateful, for they have renewed our hope for the future of our country, humanity  and our planet.
Posted by Mary at LoveTree at 6:57 PM 1 comment: