The past two weeks has been absolutely sublime... warm and dry,  perfumed by the aroma of leaves crunching underfoot. Glorious but brief! If I were  "in charge", I would make darn sure that Indian Summer lasted at least until Thanksgiving!
A few days  of blustery whirlwinds stole away most of our leaves, revealing  the naked topography that was previously veiled by green. It's sort of like watching  time rewind, the plants that are still green in the wood lots are also the same plants that are  first up in the spring.

﻿
﻿The good part of the windy days was that it became possible to dry some hay. Dave has become "one with the tractor seat" latelly, furiously trying to get up as much hay as is possible during this brief and  dry stretch of time. 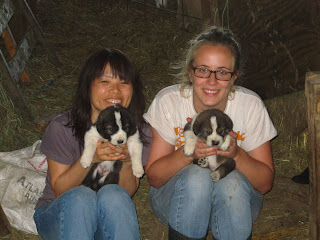 About three weeks ago Tule, our Spanish Ranch Mastiff gifted us with a litter of 8 pups, and two days later  Setsuko, our Japanese intern, arrived. The next week, Sophie, (our British intern) joined  the fray, creating the best "puppy nanny team" known to LoveTree!!!

All 8 pups are robust with healthy appetites...their poor mom has to eat super quick before the little buggers take over her food dish!


﻿ ﻿
It doesnt matter to the pups whether the food  bowl is empty  or not, they will make good use out if it. 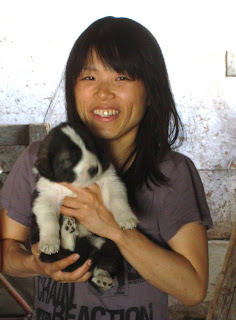 Just like Autumn,  Setsuko  left before we got used to her being here! With her  command of the English language (which sometimes bordered on a "Charro" impersonation), coupled with her great sense of humor and compassion for the animals, she deftly  knitted herself into the fabric of  this farm's history. Setsuko only had a little over two weeks to spend here  before she moved on to Canada, but her whirlwind visit left us scheming for ways to keep her here, what a spitfire! We miss you Setsuko!
﻿﻿﻿﻿